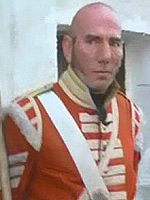 Sergeant Obadiah Hakeswill was a soldier in the British army. He was portrayed in the TV series by Pete Postlethwaite.

At the age of 11, Hakeswill’s mother died, and at the age of 12, he attempted to rape a young girl in his hometown, threatening her with a snake. To protect the girl’s reputation, however, Hakeswill was convicted of another crime; stealing a sheep. He was sentenced to death by hanging. The hanging failed to kill him, however, and his uncle cut him down and he escaped and fled south, to enlist as a drummer boy in the 33rd Regiment of the British Army. The hanging left him with a large scar on his neck and an uncontrollable facial tic. Hakeswill rose to the rank of sergeant, later in his military career and recruited 16 year old Richard Sharpe. Hakeswill treated Sharpe and the other soldiers viciously, using intimidation and strong-arm tactics as well as nitpicky charges against lost equipment to make the troops fear him. In India, with the collusion of his commanding officer, Captain Morris,he succeeded in having Sharpe sentenced to 2000 lashes (essentially a death sentence). Sharpe got away with only 202 of the sentence after intervention from Sir Arthur Wellesley. Sharpe tried to kill him later by locking him in a compound with six tigers. Once Sharpe was promoted to Sergeant, he again tried to destroy the younger man and manufactured an assault which led to an arrest warrant for Sharpe. He was again thwarted when Sharpe’s patron McCandless said the warrant was no good as Sharpe’s name was spelled wrong on it. Hakeswell later murdered McCandless in the confusion of battle – something he had done to officers he did not like before.

He reappears in Sharpe’s life in Sharpe’s Company, still a sergeant attached to the replacement troops sent to the South Essex. He conspires to remove Harper, a fellow sergeant, as a threat, so plants stolen items in his pack. Harper is demoted and flogged.

He then convinces his untried Captain to take away the green jackets and rifles of Sharpe’s men and turn them in to musket carrying redcoats, confiscating Harper’s volley gun for himself. He attempts to murder Sharpe during a night action, but only succeeds in killing a teenage ensign and wounding Sharpe.

Hakeswill overhears the location of his Sharpe’s family inside Badejoz, and is obsessed with Teresa. He arrives at the Moreno house at the same time as Robert Knowles who is determined to protect Sharpe’s family. He murders Knowles and threatens Sharpe’s daughter, Antonia, with a sharpened bayonet. Harper, Sharpe, and Teresa all tried to kill, but he escaped, leaving Antonia with a single scratch at her throat. He then deserts, knowing he at last left too many crimes to cover.

He returns in Sharpe’s Enemy as a self styled colonel in the deserter army. They capture several women whom they hold hostage, Sharpe is one of those who arrives with ransom money. The money and the woman are kept, however, and Sharpe leads a rescue, routing the deserters. Captured, Hakeswill is stripped naked and left in the dungeon with the other prisoners. He cursed Sharpe, and stole a great coat to escape in the confusion of the last minutes of the battle between the French and British in the pass outside.

In the last minutes of the battle at the Gateway of God, Teresa arrives with Nairn and the British reinforcements and spots Hakeswill fleeing across the snow, and rides after him, hating him as much as Richard had for his previous threat to her daughter, she lifted her blade to kill him, when he spun, firing his musket blindly, the bullet caught her in the throat, killing her instantly.

He fled to French lines, but Dubreton returned the deserter to a devastated Sharpe. The prisoner was taken to Frenada and condemned as a murderer and deserter. The South Essex provided a firing squad of fourteen men. Hakeswill fought the ropes that held him, Sharpe didn’t bother to watch as they fired, it no longer meant anything. Still alive after the volley, Sharpe approached him with his rifle rof the coup de grace. He cried out several times, “You can’t kill me,” when Sharpe proved him wrong. He was buried in an unmarked grave, marched over by his regiment to eradicate any sign of the site. 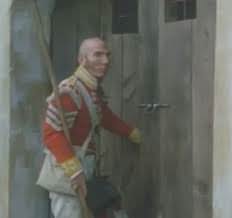 In Sharpe’s Company, Hakeswill attempted to rape Sharpe’s wife, Teresa Moreno, but was caught by Patrick Harper and beaten. He then pursued Sally Clayton, the wife of a fellow soldier. Harper threatened Hakeswill upon being told of Hakeswill’s acts, so Hakeswill framed Harper for theft. Harper received 60 lashes and a demotion leaving Hakeswill ranking sergeant. He also confiscated Harper’s Volley Gun, and used it himself in an attempt to kill Sharpe during a battle. He missed and killed a young officer instead.

During an assault on a French-occupied town, Hakeswill avoided combat by hiding under the corpse of a British officer that he stabbed. After the French were defeated, Hakeswill proceeded with many of the other soldiers to begin pillaging the town. He followed Robert Knowles to the Teresa’s house. He shot Knowles and threatened Antonia, but Sharpe and Harper arrived in time to rescue her.

Hakeswill once again cheated death and survived. He then fled and deserted the army.

Hakeswill then joined a large group of British, French and Portuguese deserters, who captured Sarah Dubreton (the English wife of a French colonel, Michel Dubreton) and Lady Farthingdale, the wife of a British colonel, Sir Augustus Farthingdale. Hakeswill demanded, from both the British and the French, ransom gold in exchange for the release of the two women. Sir Arthur Wellesley sent Sharpe and Harper to give the deserters the ransom provided by Farthingdale. Sharpe arrived at the deserter’s fortification with the gold, but Hakeswill doubled the ransom. Mistrusting of Hakeswill, Sharpe and the 95th Rifles launched an assault, freeing the women and defeating the deserters. Hakeswill, however, escaped and kidnapped Isabella Farthingdale after her release, but Teresa pursued and confronted him and was killed.
Handed over to the British Army, Hakeswill faced execution. He was shot by a firing squad, which failed to kill him, so the officer in charge of the firing squad proceeded to shoot him in the heart at point-blank range, finally killing him. 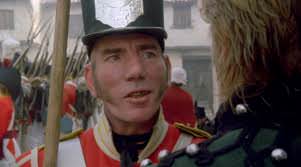 Hakeswill was a deeply sadistic man with no objections to abusing, manipulating and murdering people. He was also likely insane. One of his delusions was that he believed he couldn’t be killed. Hakeswill would also often talk aloud to his mother and at one point kept a portrait Col Windham’s wife in his hat, which he also talked to. 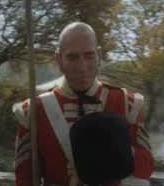 In one of the TV episodes Hakeswill is seen riding a donkey named Jeremiah. 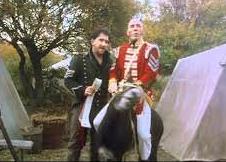 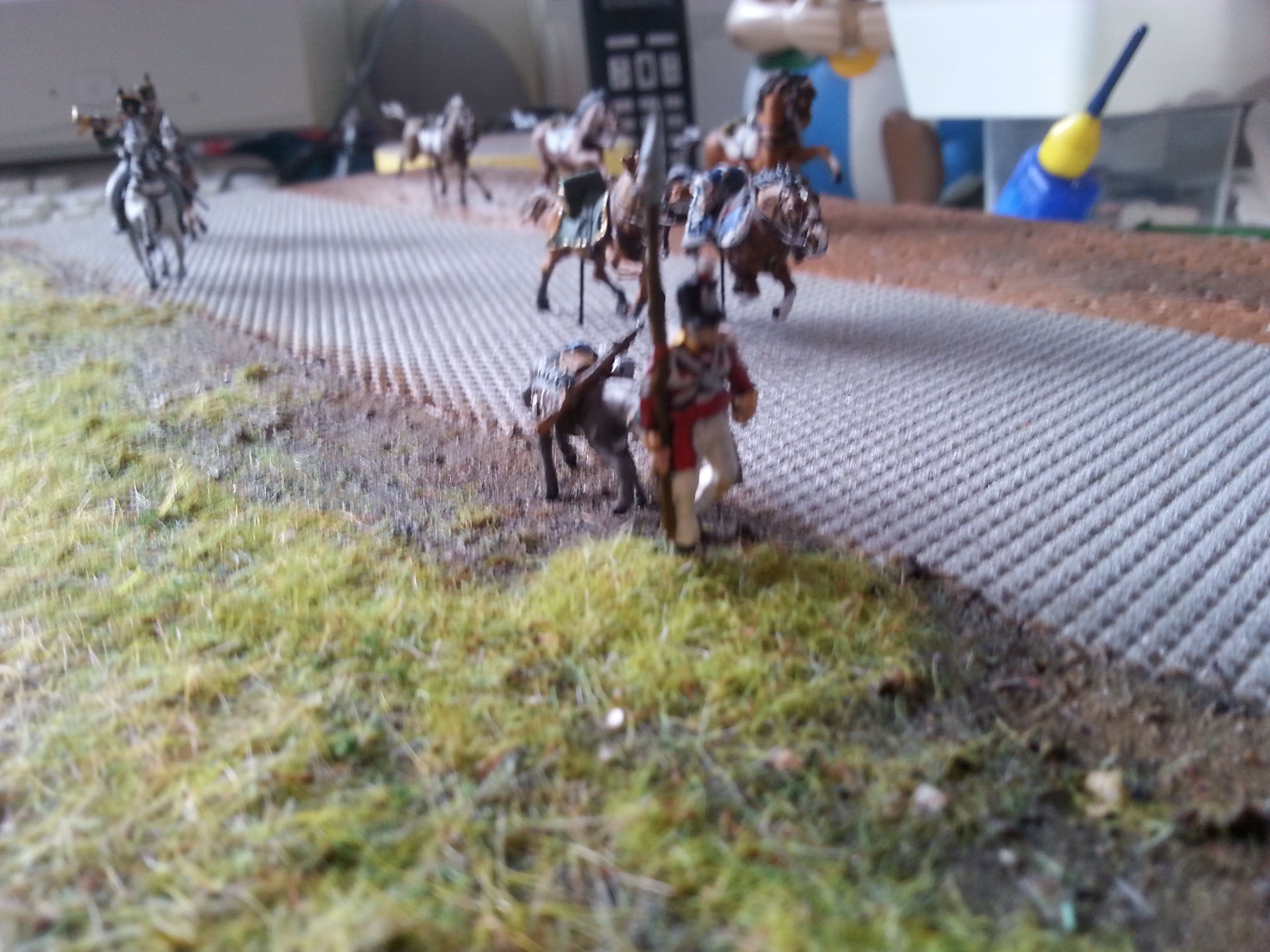 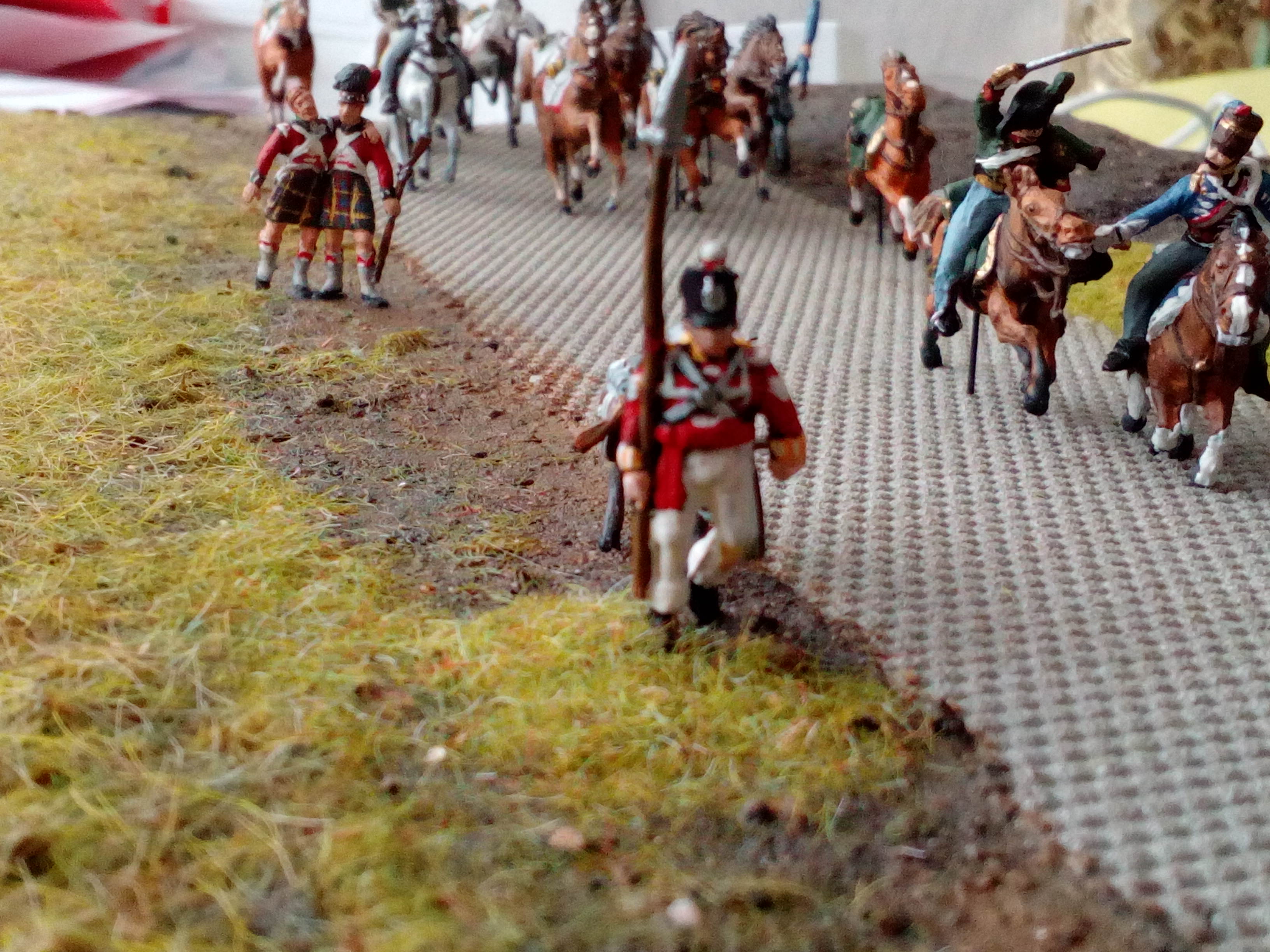 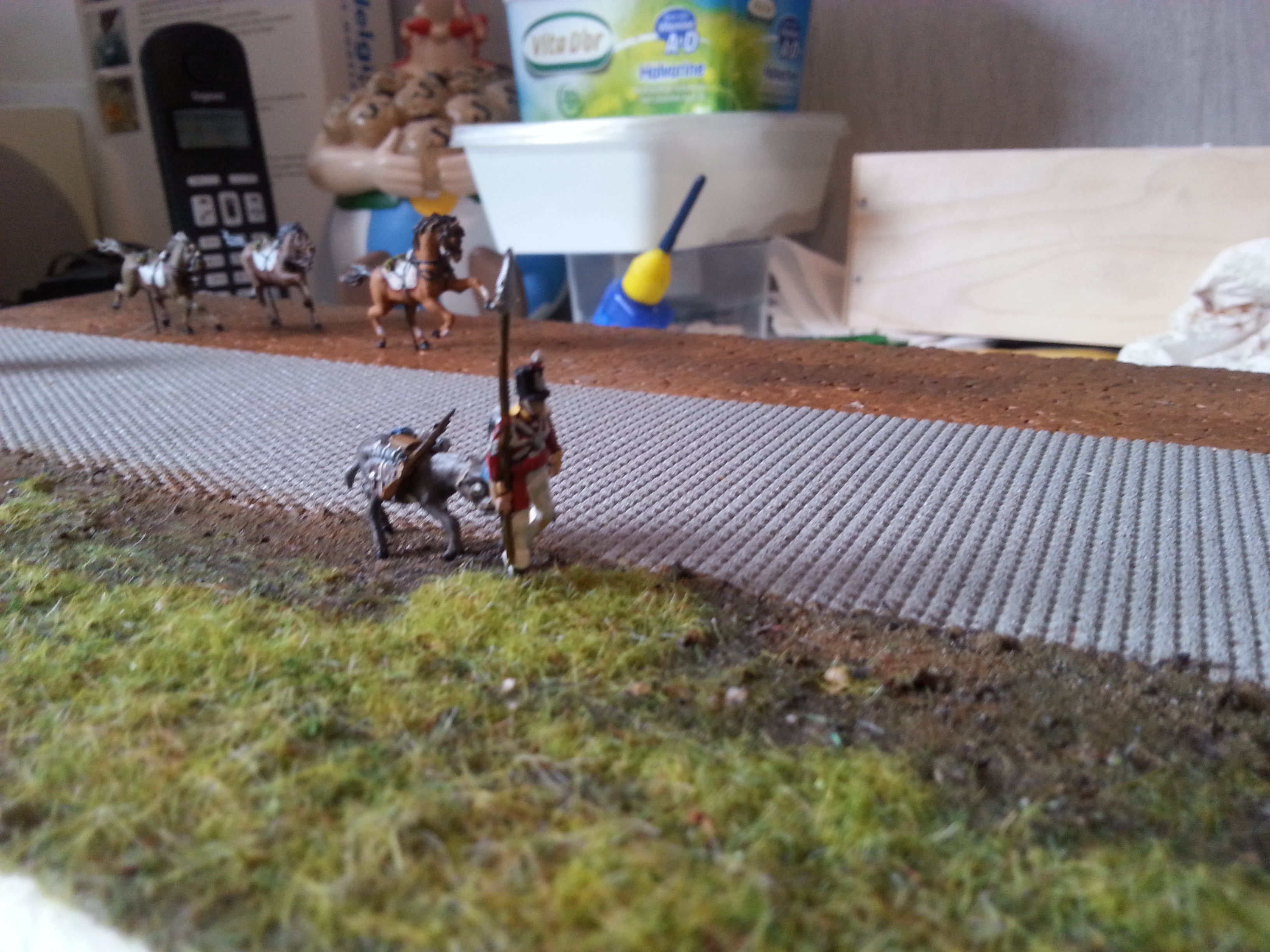 These figures (Hakeswill and Jeremiah) are put in the Diorama called: “The charge of the Cumberland Hussars” fleeing the battlefield, as Sergeant Hakeswill would probably do.