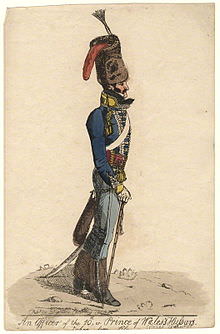 Commander of the 10th Prince of Wales’s Own Royal Hussars

Quentin served seven years in the Hanoverian Garde du Corps, prior to entering the British Army. He was appointed cornet in the 10th Light Dragoons in 1793. Subsequent promotions followed to lieutenant (1 October 1794); captain (17 May 1796); major (14 February 1805) and Lieutenant-Colonel on 13 October 1808. He served in the Peninsular War under Sir John Moore from 11 November 1808 to 16 June 1809, at the battles of Benavente and Corunna; also in Spain, under the Duke of Wellington, in 1813 and 1814, where he received a gold medal and one clasp for his conduct in command of the 10th Hussars at the battles of Orthes and the Toulouse. He received the brevet rank of Colonel on 4 June 1814 and in 1815 served under Wellington in Flanders, and at Waterloo, where he was severely wounded. He was promoted to lieutenant-general in 1838.

On 17 October 1814, Quentin was court-martialed on multiple counts of dereliction of duty during the Peninsular War. At the trial it became apparent that the charges had been invented by the officers of his regiment in retaliation for Quentin’s attempt to impose discipline on the “aristocratic rabble” under his command. The trial lasted two weeks at the end of which the court decided that Quentin should “be reprimanded in such manner as his Royal Highness the Commander in Chief shall be pleased to direct.”